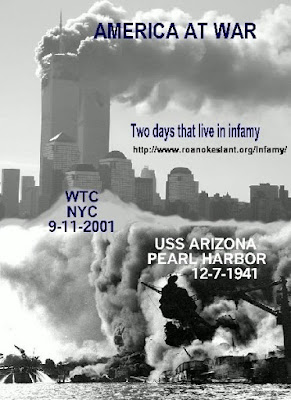 -
Roanoke Times, 11/30/08, Pg 1: Mumbai rampage has ended.
-
Who writes these headlines for the Roanoke Times? A rampage? Hundreds killed and wounded by a major coordinated military attack by the Muslim Radical Terrorists (the MRT) is not a rampage, it’s yet another 911-type of attack upon innocent civilians.
-
This massive attack by Muslim Radical Terrorists (the MRT) on the people of Mumbai
India demonstrates the naivety of the Obama Campaign, the DNC and the US Major Media all of whom spent the last year telling the world that the risk from the MRT was minimal and that the “war on terror” was a hoax and a waste of time, money and blood.
-
Included in that massive denial program was the total lack of public visibility of the 550 tons of yellow-cake removed from Sadam’s Iraq nuclear weapons program and sent to vaults in Canada for safe-keeping. Sadam’s nuclear weapons effort is now being continued by our enemies in Iran. But not to worry, Obama’s going to talk to them!
-
Clearly the MRT World War exists and is a clear and present danger to whomever the MRT decides to target.
-
Our liberal left-wing judges are now busy directing our military that GITMO members of the MRT be released on the streets of America! This is our judicial system that served OJ so well and is now busy representing and assisting members of the MRT. I’m sure that these same people are now worried that the captured MRT terrorists from the Mumbai attack that has killed and injured hundreds of innocent people are now being water-boarded to get information about the leaders of this attack. Sure wouldn’t want to put them under duress to get information vital to saving other innocent lives.
-
How quickly the media totally forgot the video of Daniel Pearl’s demise by the hands of these same MRT animals and have put their political goals above our national security and the best interests of our people.
-
Perhaps it would be fitting that on Dec 7th we should all reflect on the stark reality that the Muslim Radical Terrorists that have declared war upon us are still determined to destroy us and are pursuing a World War.
-

Roanoke Times, 11/18/08, Pg Bus 1: Citigroup to cut 53,000 more jobs after cutting 22,000 jobs this year. Citi lost another $2.8 BILLION in third quarter.
-
Who’s a key Citigroup executive? Bob Rubin, Clinton’s Treasury Secretary that led us into the Clinton Recession.
http://www.roanokeslant.org/ClintonRecession.jpg
-
So why has Obama made Rubin one of his closest economic advisors?
http://www.roanokeslant.org/ObamaEconomicAdvisorRubin.jpg
Based on Rubins’ head-in-hand posture – apparently he’s wondering the same thing!
-
Is this what “change we can believe in” means?
-
One may wonder how many of the 75,000 laid-off Citi employees are reflecting on how their job loss relate to the economic crisis initiated by Congressional Democrat leadership demands upon the lending industry to “include” people who couldn’t afford home ownership in their mortgage portfolios.
http://roanokeslant.blogspot.com/2008/09/financial-domino-effect.html
-
And now Pelosi and her court of jesters want to use taxpayer money to keep these ill-equipped people in these houses they can’t afford.
-
One may also wonder how many of the 75,000 ex-Citi employees will now loose their homes that they were qualified to own before the Democrat’s were so benevolent with the banking industries funds. Of course Democrats like Chris Dodd is in good shape after getting a sweetheart-mortgage from his friends at Countrywide.
-
Prior Items:
-
http://roanokeslant.blogspot.com/2008/08/clintons-treasury-secretary.html
-
http://roanokeslant.blogspot.com/2007/12/bob-rubin-whats-your-credit-score.html
-

Roanoke Times, 11/18/08, Pg 1: Large headline: AEP to raise rates
-
Not found anywhere is the 10% increase in the cost of the Roanoke Times!
From $31.60 to $34.88 for 8 weeks home delivery.
-
Perhaps an appropriate household budgeting approach would be to cancel the RT subscription and use that money for electricity.
-

Roanoke Times, 11/14/08, Pg Va 5: Government to study drilling off Va. Coast
The Democrats are “considering” off-shore oil drilling but want a 50-mile buffer.
-
Apparently the Virginia Democrats including Governors Warner and Kaine want off-shore oil drilling the same way they support wind-power. Say you support it in such a way that it’s not going to happen. We’re for it, as soon as pigs fly!
-
Governors Warner and Kaine have clearly NOT supported Virginia Wind-power. The Wind-farm in Highland County, now five years in a Virginia regulatory swamp, still does not have Virginia Democrat support to move forward over objections about insignificant impacts to birds and bats.
http://roanokeslant.blogspot.com/2007/09/virginia-wind-farm-someday.html
-
The plan for off-shore drilling to achieve energy independence is receiving the same kind of Democrat non-supportive double-speak that Virginia wind-power has received.
There are those who say it will take ten years to get off-shore oil into production. Judging from the wind-power project and the following graphic on the realities of the east coast continental shelf, it’s clear that it will never be done and we will continue to be held hostage by foreign extortionists.
So much for change we can believe in!
-
http://www.roanokeslant.org/OffShoreOilDrill.jpg
Click on graphic to enlarge.
-
Prior Items:
http://roanokeslant.blogspot.com/2008/09/pelosi-insulting-our-intelligence-again.html
-
http://roanokeslant.blogspot.com/2008/09/more-green-virginia-jobs.html
-

Roanoke Times, 11/8/08, Pg Bus 10: GM and Ford want Billions in Bailout money to save UAW union jobs.
-
The price for US automaker bailout should be to deunionize the industry.
-
Unions have been a primary cause behind the poor performance of the US auto-industry and lack of competitive position in the world market.
-
Deunionization would provide the opportunity to restructure and retool and redesign a totally new and competitive US auto industry.
-
Why bailout the UAW so that they can utilize their feather-bedding work-rules and strikes to continue to cripple the companies they are supposed to work for?
-

Roanoke Times, 11/2/08, Pg Horiz 1: A self-conversation by Dan Radmacher.
-
Dan is lamenting that the RT doesn’t get enough input from some folks, like me, to offset the wonderful, meaningful and correct input from liberal, socialist and left-wing admirers who enthusiastically support his views.
-
Apparently Dan was moved to this self-serving reflection about the RT’s fair and balanced reporting due to the negative feedback about publishing a number of pro & con LTE’s in which there was only one in support of McCain and a dozen in support of Obama.
-
This lack of input in support for McCain seems very strange based on the 16,000 folks who showed up for a Palin rally in Salem last week! Apparently the inference is that only one of these 16,000 was literate enough to write to the RT or that writing to the RT is akin to wasting good trees that are needed to consume the CO2 that the RT emits.
-
The highlight was Dan’s proud statement that the RT wasn’t going to endorse any candidate this year. Is there any doubt in anyone’s mind that the RT has been running a continuous endorsement of Obama for months? Is Dan trying to insult the reader’s intelligence with this tripe or is it just working out that way?
-
Perhaps if Dan and the other members of the Roanoke Times wish to peruse some contrarian comments about the RT’s views and distortions of news they could simply read the RoanokeSlant blog that contains over 1,000 items that challenge their material.
-
http://www.roanokeslant.blogspot.com
-
http://www.roanokeslant.org
-