The Millimum Plus-10 Gulf Oil Gusher

-
USA Today 7-28-10, Pg 1: Oil and tourists skip Gulf beaches even though majority of vacation spots declared OK
-
Roanoke Times, 7-31-10, Pg 5: Focus changing in spill cleanup.
-
Remember the Millimum Bug? The media “shouted” that our entire modern society including all infrastructures was destined to self-destruct midnight New Years Eve 1999/2000.
But it didn’t! Businesses, industries, utilities and government all worked diligently in 1999 and very few problems occurred. Was a lesson learned?
-
Fast forward to 2010 in the Gulf of Mexico. A mile deep oil well blow-out, killed 12 drilling system workers (not a big issue in the major media) and then the escape of 94 to184 million gallons of raw crude flowed into the Gulf.
-
So here we are on July 28 (100 days later) and the USA Today states: “the oil spill has NOT fouled the vast majority of the area’s beaches” and vacationers should come-on-down! We haven’t even had tar balls or anything with hundreds of miles of our beaches” said D.T. Minch of Visit St. Petersburg tourism authority. (Earlier media predicted oil would flow into the Atlantic and foul beaches as far north as Myrtle Beach!)
In Mississippi (A as in one) beach was closed for a week in Hancock County, but others have remained open, some with advisories.
Few beach warnings have been issued in Alabama and Florida and none in Texas.
-
The Roanoke Times Pg 5 story update: A new analysis by the NOAA showed most surface oil in the Gulf had degraded to a thin sheen and beaches in Mississippi, Alabama and the Florida Panhandle will likely not have significant problems.
About 70% of Louisiana waters (the most affected areas) are now open to commercial fishing.
-
The Gulf oil spill is indeed a major issue. Has it been blown out of context? Have millions of dollars in tourist and vacation revenue been scared away unnecessarily?
Is there a lesson here? As Ron Emanuel, Obama’s Chicago main man, has said “let’s not waste a serious crisis”!
However in this crisis case Obama’s got tar-balls on his hands.
http://roanokeslant.blogspot.com/2010/06/obamanation-continues.html
-
Perhaps having major media “news” 24x7 with an insatiable appetite for ratings will someday become passé. Perhaps the “news” media can trade-down their “anchors” with the fashion looks and miniskirts for news we can believe in.
Perhaps not; Perhaps we get what we tolerate.
-
http://roanokeslant.blogspot.com/2010/05/obamas-gulf-oil-actions-of-ill-repute.html
-

John Kerry’s New Not So SwiftBoat

-
Roanoke Times, 7-29-10, Pg 1 & 3: Arizona judge blocks immigration law.
San Diego Union-Tribune, 7-19-10, Pg 4: Virginia’s unprecedented surge in detentions of illegal immigrants.
-
The Clinton appointed Arizona judge did her liberal duty and hacked away at Arizona’s duplicate copy of the Federal immigration laws that Obama and associates refuse to enforce. So much for state’s rights and the ability of states and communities to act in the best interests of the health and welfare of their citizens when confronted by massive numbers of illegal infiltrators.
Just more hope and change and hypocrisy we can believe in!
-
Not found in the Roanoke Times, but published in the San Diego Union-Tribune was a very comprehensive article on Virginia’s unprecedented surge in detentions of illegal immigrants picked up on criminal charges with particular focus on the laws and enforcement in Prince Edward County.
There will be a new 30-acre facility in Farmville in-addition-to the $21 million center in Prince Edward County.
These tax funded facilities are required to manage people who shouldn’t be here in the first place, and would have either been repulsed at the border or been deported if Obama would just enforce the laws he took an oath to enforce.
-
New News 8-2-10:
In a decision that could lay the groundwork for an Arizona-style immigration policy, Virginia's attorney general said state law enforcement officers are allowed to check the immigration status of anyone "stopped or arrested."
Can't wait for the howls and cries from the Roanoke Times Editors and their Obamanation associates.
http://www.foxnews.com/politics/2010/08/02/virginia-attorney-general-rules-police-check-immigration-status/
-
-
http://roanokeslant.blogspot.com/2010/05/obamas-national-guard-to-border-two-per.html
-
http://roanokeslant.blogspot.com/2008/06/democrats-for-homeland-insecurity.html
-
http://roanokeslant.blogspot.com/2007/06/democrats-sink-immigration-bill.html
-

-
USA Today, 7-25-10, Pg 6A
Not found in the Roanoke Times – would be totally inconsistent with their declaration that the war is over:
http://roanokeslant.blogspot.com/2010/05/roanoke-times-declares-end-of-war.html
-
“We are at war with al-Qaeda” Prime Minister Francois Fillon said, a day after President Sarkozy announced the death of hostage Michel Germaneau, a humanitarian worker in Niger.
http://politifi.com/news/Sarkozy-blasts-AQIM-slaying-of-Frenchman-974112.html
-
Are the French jumping to a premature knee-jerk reaction?
Is this a French John Wayne, George Bush, Cowboy thing?
After many Frenchmen have died in embassy and night-club bombings over the last 10 years, including three who died in the WTC 9/11 attack and the French troops that have died on the battle field why this rush to judgment and declaration of war now?
-
This is very curious and certainly inconsistent with Obama’s strategy of making friends with the Radical Extremist Muslims as so well articulated by his NASA Administrator, Charles Bolden.
http://roanokeslant.blogspot.com/2010/07/obama-nasa-islam.html
-
Does a "declaration of war" mean that France is actually going to do something?
Certainly puts them in a better position to surrender should things go badly!
-

Hype the Hot, Hide the Cold

-
Roanoke Times, 7-9-10, Pg 5 & 7: Study says 100 degree heat waves are likely to increase and thousands of people may die – (and it’s your fault for using hydro-carbon fuels and making CO2!).
-
During one of the longest and coldest periods in the Roanoke area, with two months of continuous snow cover and subfreezing temperatures, the Roanoke Times quoted their sources that assured us that “there’s no connection between short term weather and climate”. But now the reason we're having some hot summer days is proof of the Gore Global Warming CO2 hypothesis.
-
Back on Pg 7 there’s some interesting Roanoke record temperature data:
Aug 5, 1930: Roanoke record high: 105 degrees
June 24, 1930 to Sept 3 1930: 14 days of 100+ degrees
July 10, 1936: Roanoke matched the record high again: 105 degrees
-
How do our record high temperatures track against CO2?
-
Click to Enlarge the graphic: 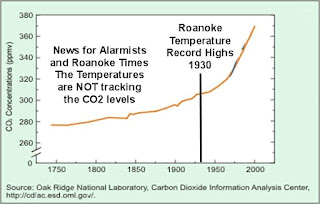 -
It would also be of interest to reflect on the amount of people, buildings, concrete, blacktop, vehicles and I-581 that have been added to Roanoke since 1930. That begs the question: shouldn't it be a lot hotter now than in 1930?
-
It would be helpful if the liberal media who are promoting the Alarmist-Gore-IPCC-Hypothesis would stop publishing junk-science and stick to the facts and publish all this type data in the historical perspective that we are in a 250 year warming cycle of unknown cause, that started at the end of the little ice age in 1750, and that there is significant amounts of natural variability locally and globally.
Stop propagating the patently false alarmist hype that every daily weather event is a direct result of man-kinds activity. Even the IPCC rejects that tripe!
-
Some Prior Items:
http://roanokeslant.blogspot.com/2010/07/science-and-ideology.html
-
http://roanokeslant.blogspot.com/2010/06/more-climategate-doublespeak.html
-

-
The Obama directive that a primary objective of NASA is to suck-up to the Muslim world was even more gross than the Editors of the Roanoke Times could bring themselves to print.
-
-
http://www.foxnews.com/politics/2010/07/05/nasa-chief-frontier-better-relations-muslims/
-
NASA Administrator Charles Bolden said in a recent interview that his "foremost" mission as the head of America's space exploration agency is to improve relations with the Muslim world.
Bolden said in an interview with Al Jazeera that strengthening those ties was among the top tasks President Obama assigned him.
“When I became the NASA administrator -- or before I became the NASA administrator -- he charged me with three things. One was he wanted me to help re-inspire children to want to get into science and math, he wanted me to expand our international relationships, and third, and perhaps foremost, he wanted me to find a way to reach out to the Muslim world and engage much more with dominantly Muslim nations to help them feel good about their historic contribution to science ... and math and engineering," Bolden said in the interview.
-
-
It is difficult to comment on this gross malfeasance of office without using profanity!
The NASA that JFK missioned to send Americans to the moon is now missioned by Obama to suck-up to the people that harbors and supports our enemies who have declared war upon us and killed thousands of Americans and continue to attack us in every way they can.
-
Click to enlarge image:
- 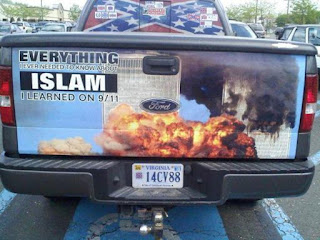 -
Roanoke Times, 7-4-10, Pg Horiz 1: Not blinded by science, but ideology.
-
The author, Chris Mooney, unsuccessfully tries to make the point that the public is not responding to the scientific community on “selected subjects” because they are either ignorant or ideologs who have an economic or political agenda.
The author further opines that the most egregious nonbelievers are college educated conservatives. His primary example of his political thesis is those really bad global warming Skeptic people.
-
The author clearly doesn’t comprehend that real educated people are Critical Thinkers who are by definition Skeptics! On the other hand, those other educated people who just regurgitate the pabulum offered by many liberal college professors are programmed to repeat back and accept the material served up by the “all knowing” media and so called “experts by consensus.”
-
Perhaps the 30,000+ signers of the Petition Project: http://www.petitionproject.org/
who represent all sectors of science and engineering aren’t ideologs but are instead educated Skeptics who understand earth science, the long-term variability of earths climate and who differentiate between global warming, the effects of greenhouse gases and human activities. Perhaps they are not prone to jump on a “consensus bandwagon” but instead question the real science available from all sources and also question why none of the Alarmists will engage in meaningful technical debate.
The debate forums are available from organizations like Heartland Institute at:
http://www.globalwarmingheartland.org/index.html
-
A key statement included: “the scientists often fail to realize that a more scientifically informed public is not necessarily a public that will more frequently side with scientists.”
Image that! Educated people questioning the thesis being proposed by scientists!
Just how arrogant can this author and his scientific associates be? Apparently things are better for them when there is a population covered by a blanket of ignorance and superstition standing ready to buy the alchemists gold or the medicine man’s elixir.
-
Instead of lamenting and trying to marginalize the Skeptics, why not engage them in open and fair debate on the scientific facts and the uncertainty of the hypothesis of man-made global warming.
-
How trusting can the “common man” be when even Jon Stewart points out the total lack of creditability and professionalism of the Alarmists?
http://www.roanokeslant.org/ClimateGate/ClimateGate.swf
-
http://roanokeslant.blogspot.com/2010/05/challenging-global-warming-alarmists.html
-
http://www.roanokeslant.org/GlobalWarmingThoughts/
-
http://roanokeslant.blogspot.com/2010/06/more-climategate-doublespeak.html
-
http://roanokeslant.blogspot.com/2010/05/hypocrisy-of-uva-faculty.html
-