Roanoke Times, 9/16/09, Pg 5: Rep. Joe Wilson made the House look bad, Democrats say.
-
Maureen Dowd labeled Joe Wilson a racist for his outburst stating Obama lied about illegal immigrants taking advantage of Omaba care.
She even managed to throw-in her imagined “Boy” word just in case folks weren’t fired up enough to meet her satisfaction!
(Actually Obama did lie and now the Democrats have been forced to specifically address this issue!) “Sen. Kent Conrad (D-N.D.), the chairman of the Budget Committee and another negotiator, also said that illegal immigrants had been a focus of the senators' discussions. He said the group worked on "further refinements on how we make certain that no one who is here illegally would benefit from these additions."”
http://roanokeslant.blogspot.com/2009/09/why-apologize-for-truth.html
-
Not to be left out of the mud-slinging, Jimmy Malaise Carter jumped in and confirmed that Joe Wilson and all others opposing Obama are in fact racists.
Since polling shows that at least half of Americans oppose Obama policies, which means according to Dowd and Carter, there’s at least 150 million racists roaming around.
-
Just in case we still don’t get it – Rep. Hank Johnson, D-Ga went on national TV to advise us to be very afraid -- the KKK is coming back because white folks oppose Obama!
http://www.foxnews.com/politics/2009/09/15/congressman-people-don-white-hoods-wilson-rebuked/
-
In the middle of all this racial intimidation, a big nasty man attacked a young frail white girl on the MTV stage, but apparently Kanye West attacking Taylor Swift was not racial – not even criminal. Don’t they have security for these things and hasn’t the local DA heard of the crime of Battery? Was this girl not terrorized? Who cares - she’s white!
- 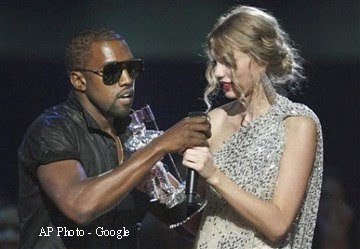