-
Roanoke Times, 9-20-10, Pg 15: Opinion: A melting Arctic hits home
-
A summary of the varied wildlife that lives in the Arctic region and the author’s assessment of the impact a reduction in Artic ice cover may have on their survival.
Includes a large graphic showing yet another forlorn polar bear and a dire warning to Americans to change their ways.
-
Our 250 years of natural global warming has indeed had impacts on the environment as have the many thermal cycles the earth has experienced over the millennium.
During a major past cooling period, the brown bears that moved north found marine mammals to be a good source of food. Over time the lighter haired bears survived best resulting in the polar bears we have today.
What a change, and without any input from mankind!
http://roanokeslant.blogspot.com/2009/04/brown-polar-bears-at-risk.html
-
Sixteen thousand years ago the Atlantic Ocean was 400 feet lower than it is today. The North Carolina Outer Banks were 50 miles east out at the continental shelf. Talk about your melting ice raising the sea level! And all without any input from mankind!
-
From 1750 to 1950 the Mendenhall Glacier retreated (melted) from close to downtown Juneau Alaska up the valley two and a half miles (2-1/2 mi) with no significant change in CO2 or any input from mankind!
-
CLICK ON IMAGE TO ENLARGE: 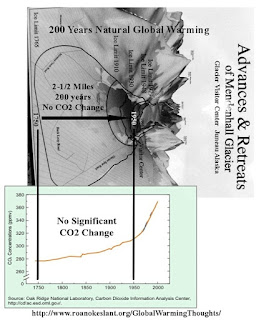