-
Roanoke Times, 9-4-11:
Pg Horiz 1: Give Marx a chance to save the world
Pg Virginia 1: Labor Unions responsible for all that is good
Pg 10: House (that’s the Republican’s) not likely to help Obama create jobs
-
The Roanoke Times Message for this Labor Day:
Carl Marx is the answer to our economic challenges, the Republicans want the American working people to be unemployed and all would be great if only the labor unions controlled and ran our businesses.
-
This is an amazing trilogy of gross political and communist propaganda not seen since the demise of the New York Daily Worker that was a bastion of class-warfare and Communist indoctrination up through the 1950’s.
-
A Trifecta from 1918 Russia might be a good description of this tripe by the Editorial Staff of the Roanoke Times that not only distorts American History but tries to influence the public into following Karl Marx (the pied piper of The Evil Empire).
Is there an example anywhere in the world where Communism has been the answer to providing even a semblance of what our American system has provided for our people? Hasn’t communism provided the environment and infrastructure for the ascension of violent despots and dictators like Stalin and his associates across Eastern Europe?
-
What a sad commentary that these affluent elitist liberals at the Roanoke Times would promote this garbage for American Labor Day and on the eve of 911!
-
Instead of reading and promoting Marx, the RT Editors should watch these videos; it would be “chicken soup” for their sadly misdirected views and beliefs, and a walk through The American Constitution might also be helpful:
-
For video of JFK’s view of the fruits of Karl Marx’s communist ideology as expressed at the Berlin Wall: click-on:
http://www.roanokeslant.org/JFKBerlinWall
-
And for Ronald Reagan at the Berlin Wall:
http://www.youtube.com/watch?v=WjWDrTXMgF8
-
And Ronald Reagan’s Farewell Address: “City on a Hill”
http://www.youtube.com/watch?v=qUGR5ushe0E
-
-
Click on following Link for the Real and Proper Perspective of 911:
http://4.bp.blogspot.com/-Ul53eVkAuaA/Tl4kOV0Y6KI/AAAAAAAAAMM/NzZHn60uxcs/s1600/INFAMY.jpg
-
-
The Roanoke Times Gross "Cartoon" to go with their obscene article
- 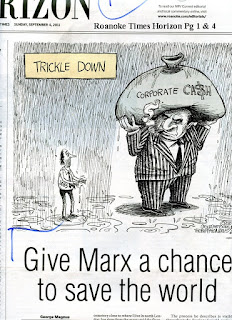