-
Roanoke Times, 11-13-11, Pg Horiz 1: GOP attacks on immigrants could backfire
A 3 x 18 inch dissertation espousing the positives of immigrants and how the GOP is maligning them.
-
After reading the article several times, I could not find the word ILLEGIAL! Just as Orwell so well described in “1984” a key part of deception is using “Double Speak”. In this case let’s not distinguish between “Immigrants” and “Illegal Immigrants”. That way anyone proposing that “illegal immigrants” are a systemic problem is clearly racist and nasty and deserves to be shunned.
Based on this article, it hasn’t taken Ms. Nuckols very long to join the Editorial Girls Left-wing Sorority at the Roanoke Times.
-
Note to the RT Editorial Girls and all Liberals:
Illegal is not a race, It’s a crime!
-
There is no other country in the world that does not rigorously control immigration into their communities. To disparage those who propose that we enforce the immigration laws of the US certainly reaches a new level of hypocrisy.
-
We should all reflect on and heed Teddy Roosevelt’s 1907 speech:
http://www.roanokeslant.org/American.jpg
-
Click graphic to enlarge: 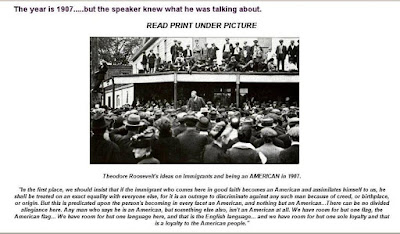 -
What an appropriate and timely message for all immigrants for all time!
Both of my parents were “Legal Immigrants” and complied with every element of Teddy's proclamation.
It’s too bad for our Country that the Progressive-Liberals have made this policy “politically incorrect”.
-
To add insult to injury a California school principal did not violate the freedom of speech of a group of students who wore American flags on their shirts on Cinco de Mayo when he told them to turn the shirts inside out or go home, a federal judge has ruled.
http://www.foxnews.com/us/2011/11/13/court-backs-high-school-in-flap-over-american-flag-t-shirts/
What a sad commentary on the status of Americanism and Patriotism in our once great Country and what a sad prelude to Veterans Day and all it represents.
-
Gee Toto; I'm not sure we're in America anymore!
-