-
Roanoke Times, 3-17-12, Pg 5: Despite food-aid pact, North Korea satellite launch set.
3-18-12, pg 5: China concerned over planned launch.
-
Pres Clinton assigned Jimmy Carter and Bill Richardson to negotiate with North Korea to give them money, food, fuel and a nuclear power plant for promises to not develop nuclear weapons or long range missiles.
Pres Bush’s team determined that the North Korean’s had cheated (imagine that!) and had built both nuclear weapons and long range missiles.
Now Obama has had Bill Richardson “negotiate” yet again more of our stuff to stop further development of nuclear weapons and long range missiles.
-
North Korea is about to launch an intercontinental missile capable of carrying a nuclear warhead all the way to Bill Richardson’s home in Albuquerque, New Mexico! Talk about karma and comeuppance! And how about all those Liberal-Progressives in LA and SF now well within North Korea’s reach! Sleep tight – Obama’s awake!
-
And to add incredible insult to injury, Obama and the Democrats have launched a war against development and deployment of an anti-missile defense system starting with Ronald Reagan’s so labeled “StarWars”.
http://www.youtube.com/watch?v=7o84PE871BE&eurl
-
In addition to North Korea we also now face a similar threat developing in Iran. Perhaps we will come to understand that we are just as vulnerable as Israel to nuclear attack with very minimal defense systems to protect us.
-
-
To Enlarge - Click on Graphic
- 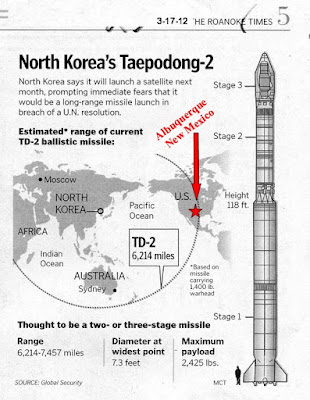