-
Roanoke Times, 6-18-12, Pg 12, Editorial: Now deal with rising doublespeak
-
The Editors of the RT are indeed onto something with the term doublespeak, however, their 1984 flashback misdirects the term; but then again, that’s what doublespeak does!
-
Global warming, climate change and ocean rise are all used as doublespeak by the alarmist community and their media friends as meaning man-made, man-caused, man-kinds folly. These terms are only scientific terms when detached from the Goreite political agenda. That is where the doublespeak started and continues today including this RT editorial.
-
The RT publishes lots of graphics; however they find it impossible to publish data and graphics when promoting alarmist agenda items. Here are two scientific graphics of the history of sea level rise over the past 24,000 years and a more detailed view of the past 130 years, all of which shows a steady rising sea level with no indication that it is man-caused.
-
16,000 years ago the North Carolina Outer Banks were 50 miles out at the continental shelf because the ocean was 400 feet lower that it is now. It is indeed doublespeak or worse to claim this is man-kinds doing.
-
The other interesting aspect of nature is the variability. The RT failed to ever mention that back in Sept 2011 there was published data and a graphic from NASA shows sea levels have dropped 6 mm in the last 6 months, wiping out the rise over the past 2 years. The data indicated we will have two years in a row of significantly reduced increases in sea level rise compared to the 130 year historic rate of 8 inches rise per century.
http://roanokeslant.blogspot.com/2011/09/flush-quick-ocean-levels-are-dropping.html
-
The Climate is Changing – The Climate has always been Changing.
The Sea Level is Rising – The Sea Level has been rising for 20,000 years.
-
So who are the ones using doublespeak and misdirection and misrepresentation?
-
http://en.wikipedia.org/wiki/Current_sea_level_rise
-
- 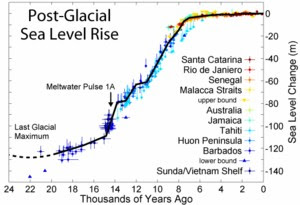 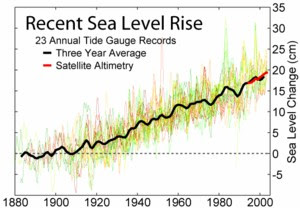