-
Will there be real lessons to be learned from the massacre at the Sandy Hook Elementary School in Newtown CT?
-
Law-abiding people are the only people who don’t have guns in gun-free zones!
-
In the event of a crisis call the cops, they’ll be there in 20 minutes. By that time it will be clear that they carry guns to protect themselves, not you.
-
There is no police unit in the country with the mission to protect “you”. Their mission is to protect “the public”. That’s a very big distinction; Think about it!
-
NRA chief urges armed guards in 'every single school,' dismisses calls for gun control
http://www.foxnews.com/politics/2012/12/21/nra-chief-urges-armed-guards-in-every-school-dismisses-calls-for-gun-control/
-
Obama calls for crazy Uncle Joe to fix the violence in American problem.
But don’t worry about mental health – which was clearly the cause behind all the major mass shootings in recent history, exclusive of the “work-place” violence at Ft. Hood.
http://roanokeslant.blogspot.com/2011/12/obama-team-labels-fort-hood-shooting-as.html
-
At the same time Obama embraces “Kill Americans” Rapper Psy in the White House for Christmas – what’s wrong with that picture?
http://roanokeslant.blogspot.com/2012/12/obama-embraces-kill-american-rapper.html
-
Anyone looking at the “entertainment” business with movies, TV and video-games that dull the senses to graphic violence? Let’s not look there; we know who they give their campaign contributions to.
http://roanokeslant.blogspot.com/2012/12/obama-embraces-kill-american-rapper.html
-
Anyone going to consider the breakdown in morality and values of the American society?
Apparently not – the liberals and progressives are very happy with our state of affairs as can be measured by the chaos and crime in many of our school rooms.
http://roanokeslant.blogspot.com/2012/03/chaos-in-classroom-challenged-students.html
-
The Roanoke Times’ nasty cartoon about the Sandy Hook Elementary School massacre clearly defines the views of the liberal media. How sad it that?
http://roanokeslant.blogspot.com/2012/12/roanoke-times-editors-achieve-personal.html
-
Aren't we all glad that we got God out of our classrooms -- and in time for Xmas too!
http://roanokeslant.blogspot.com/2012/12/twas-11-days-before-christmas.html
-
In a tiny Texas town, teachers are armed with concealed weapons, a 'better' solution than a security guard? Pilots now carry guns don’t they?
http://www.nydailynews.com/news/national/teachers-armed-guns-texas-school-article-1.1224257#ixzz2FmykWzHM
-
Gov. Bob McDonnell open to teachers with guns
Bob McDonnell said the idea of having armed and trained school officials is worth talking about.
http://www.roanoke.com/politics/wb/318108
-
This picture of a teacher and her class in Israel indicates that having the means for protection in all venues may again be required in the US; back to the days of settlers and Indians where guns were even carried into church services.
- 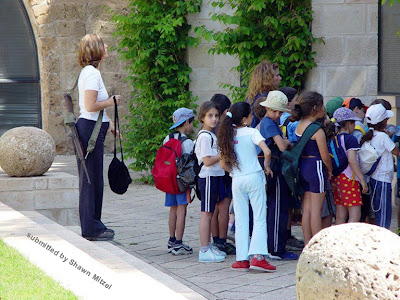