-
Bo Dietl Weighs In On Cop Killings in NYC
https://www.youtube.com/watch?v=5tVQlfFPspE
-
-

Our police are the thin blue line between the law-abiding citizens and the anarchists and mad-dogs that would prey upon the defenseless at any and every opportunity.  No place is that more true than in the ghettos!
-
We (those who depend upon our police officers to protect us, our family, our community and our way of life) have lost two good young guardians.
Two families have lost their loved ones and providers.
Our Homeland is a less safe place.
-
The consequences of the racial riot-baiting over the Brown and Garner incidents, which were clearly NOT racially motivated, and the blood of these two officers is clearly on the hands of vile politicians and despicable self-anointed “leaders” like Sharpton (who has an MSNBC show all his own  ---- How disgusting is that!)
-
-
NYC Protesters Chant: 'What Do We Want? Dead Cops!' When do we want them? Now!
http://www.breitbart.com/Big-Government/2014/12/13/Al-Sharpton-Leads-Thousands-in-Saturday-March-on-Washington-DC
-
For those who just can’t believe this really happened click on YouTube:
https://www.youtube.com/watch?v=dj4ARsxrZh8
-
This is NYC Mayor deBlasio public statement after the Garner incident:
http://www.foxnews.com/us/2014/12/14/nyc-police-officers-want-deblasio-banned-from-funerals/
In a press conference about the grand jury’s decision not to charge the officer, de Blasio (NYC Mayor) announced that he had warned his 17-year-old, mixed-race son, Dante, to be careful around police officers, which caused PBA President Patrick Lynch to claim de Blasio had thrown NYPD officers “under the bus.”
-
Despicable Roanoke Times “Cartoon” ---- Supports Sharpton and deBlasio
-
- 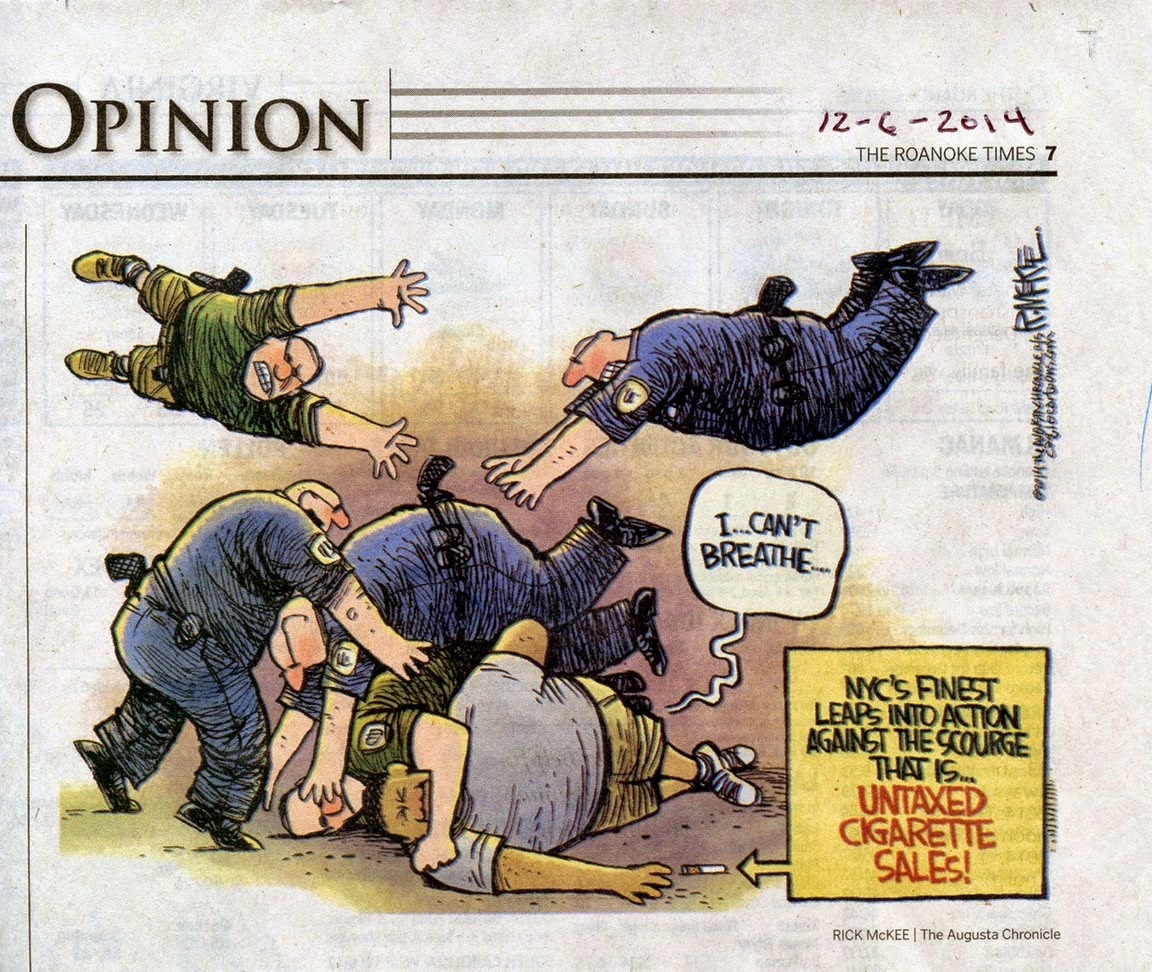 -
-
Blood on Many Hands': Police union president slams De Blasio after cops' killing
http://www.foxnews.com/us/2014/12/21/blood-on-many-hands-police-union-president-slams-de-blasio-after-cops-killing/
The president of the NYPD union slammed Mayor Bill de Blasio in reaction to the deaths of two officers who were ambushed and gunned down in their patrol car in broad daylight Saturday in Brooklyn.
"There's blood on many hands tonight," Patrolman's Benevolent Association President Patrick Lynch said late Saturday. "Those that incited violence on this street under the guise of protest, that tried to tear down what New York City police officers did everyday.
"We tried to warn it must not go on, it cannot be tolerated," Lynch continued. "That blood on the hands starts on the steps of city hall in the office of the mayor."
-
-Police believe New York City cop killer was a member of the Black Guerrilla Family: sources
-
-