-
Appeals court refuses to reinstate Trump's travel ban
http://www.roanoke.com/news/politics/appeals-court-refuses-to-reinstate-trump-s-travel-ban/article_6edbe1db-3ba3-5a82-9de8-dab10e24af64.html
-
-
Trump’s Immigration Order In Hands Of The Sanctuary-Judges
Reversal rates reveals that the 9th Federal Circuit has the highest reversal rate at about 83.33%.
http://roanokeslant.blogspot.com/2017/02/trumps-immigration-order-in-hands-of.html
-
I am so impressed!  I did not know that the 9th Court Judges were just elected by the American People to be responsible for the safety and security of the American people and the HomeLand!
-
The Sanctuary-Judges clearly decided this case on behalf of the San Bernardino couple who would have been very inconvenienced by “enhanced vetting”.
-
- 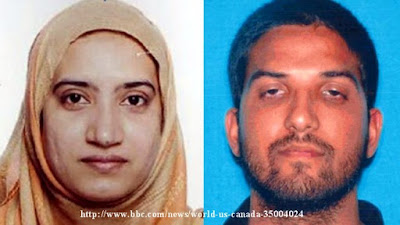 -
Fourteen people were killed and 22 injured, most of them county employees.
-
Isn’t it interesting that the countries designated by Obama as Terrorist States have now become Muslim States and designating them for “enhanced vetting” is now a Big Religious Problem.  Talk about Liberal Hypocrisy!
“The law signed in December 2015 by Obama applies to countries designated by the United States as having "repeatedly provided support for acts of international terrorism." Iraq, Syria, Iran, Sudan, Libya, Somalia and Yemen (the same seven countries in Trump’s order) have that designation.”
http://www.politifact.com/wisconsin/article/2017/feb/03/donald-trumps-executive-order-muslim-ban/
-
Obama’s FBI: It’s Terrorism! Really?
FBI Finally Concluded (announced 3:09 PM ET, Fri December 4, 2015) that the San Bernideno Radical Muslim Terrorists committed an act of Terrorism.
http://roanokeslant.blogspot.com/2015/12/obamas-fbi-its-terrorism-really.html
-
Knee-Jerk Obama: San Bernardino Just More WorkPlace Gun Violence
Once again Obama, the chief law-enforcement officer in the US, for whom the FBI, DOJ and the ATF all report, has given the federal investigators their conclusions before the investigations start.
The answer I want:  This is workplace violence and the issue is gun control just as I directed at the Fort Hood shooting!
http://roanokeslant.blogspot.com/2015/12/knee-jerk-obama-san-bernardino-just.html
-
What If Kate Steinle Worked At The Roanoke Times?
An “illegal immigrant” who had been deported five (5) times for serious crimes used a stolen Federal Agent’s gun to shoot a young white woman on the streets of the Sanctuary City of San Francisco.  The City released this criminal onto the streets while refusing to communicate to ICE that they were turning him loose.
http://roanokeslant.blogspot.com/2015/07/what-if-kate-steinle-worked-at-roanoke.html
-
Trump Vetting Review Exposes Sad US WorkForce Situation