4-19-2018-PM:  DOJ watchdog sends criminal referral for McCabe to federal prosecutor
http://www.foxnews.com/politics/2018/04/19/doj-watchdog-reportedly-sends-criminal-referral-for-mccabe-to-federal-prosecutor.html
(my have to copy-past link into browser)
-
-
Former FBI agent pleads guilty to leaking secrets to reporter -Justice Dept
https://www.aol.com/article/news/2018/04/17/former-fbi-agent-terry-albury-pleads-guilty-to-leaking-secrets-to-reporter/23413862/
“Terry Albury, 39, a former special agent in the FBI's Minneapolis field office, could face up to 10 years in prison for each of the two counts against him, (two criminal counts related to retaining and disclosing defense information)  the Justice Department said in a statement.
"As this prosecution demonstrates, we will not waiver in our commitment to pursue and hold accountable government officials who violate their obligations to protect our nation's secrets," Assistant Attorney General John Demers said in a statement.”
-
-
The DOJ holds everyone accountable.  Really? How about:
Comey, McCabe, Hillary all of whom were (are) guilty of felony violations of the laws relating to handling-protecting classified information, lying to FBI and under oath and leaks to those without proper clearance and need-to-know.
-
And Comey is admitting on his book tour that he based his FBI Investigation decisions and actions on his choice to be president -- is that not sedition?
18 U.S. Code Chapter 115 - TREASON, SEDITION, AND SUBVERSIVE ACTIVITIES
-
GOP reps refer Comey, Clinton, McCabe for criminal investigation
http://www.foxnews.com/politics/2018/04/18/gop-reps-refer-comey-clinton-mccabe-for-criminal-investigation.html
(may need to copy-past link into browser)
“Nearly a dozen Republican members of Congress on Wednesday sent a criminal referral to the Justice Department and FBI seeking an investigation of former bureau boss James Comey, his deputy Andrew McCabe, ex-Attorney General Loretta Lynch and Hillary Clinton in connection with 2016 campaign controversies.”
-
- 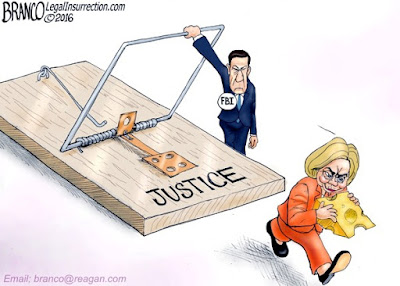