-
11 Quick Things To Know About The Inspector General’s Report
http://thefederalist.com/2018/06/15/11-quick-things-know-inspector-generals-report/
-


-
Roanoke Times, 6-15-2018, Pg 3: Watchdog sees errors, not bias, in probe of FBI
http://www.roanoke.com/news/politics/wire/key-findings-of-justice-watchdog-report-on-clinton-probe/article_8e48da69-7212-5731-bc40-42dae7a17b28.html
-
-
The DOJ-IG LapDog that is supposed to be the WatchDog clearly demonstrated that no entity can investigate its own wrong-doing!
Did we not already know that?
It’s said that fish rot from the head down – apparently so do rogue government entities like the Lynch-Comey Team – anyone remember IRS Lois Lerner?
-
500-pages of data outlining bias and malfeasance in the DOJ and FBI, But, no felonies, misdemeanors or real problems documented.
Reminiscent of Comey’s statement outlining Hillary’s multiple felonies and then ending with: ‘no charges because she didn’t ‘intend’ to be a felon’.
We now know that the FBI knew, but hid, that foreign agents accessed Hillary’s server and national security data, proof positive of the vulnerability of the unprotected data.
http://www.dailymail.co.uk/news/article-5845799/FBI-knew-foreign-actors-access-Hillary-emails-7-weeks-Comey-let-hook.html
-
DOJ AG Lynch met with Bill Clinton, in secret, at the apex of the DOJ investigation of Hillary’s malfeasance of total lack of security of Top Secret materials for which others go to prison for a lapse of just one page of one document or a selfie on a sub, But No Problem Here.
-
Lynch clearly defaulted to Comey, after collaborating with Bill, the decision Not to file charges against Hillary; the IG calls this an over-reach and insubordination by Comey – No -- it was actually delegation by Lynch to isolate herself and Obama from the no-fault decision – just like Pontius Pilate and the hand-washing thing!
-
Comey assigned Peter Strzok to be a lead FBI agent for both Hillary investigation and the so called Collusion investigation. He then went on to be on the Mueller Team.
Clearly Strzok was not just biased, he was admittedly part of an effort to stop the Trump election, and after the election, was dedicated to having Trump impeached with the DNC-collusion-dossier-FISA plan.
http://roanokeslant.blogspot.com/2018/01/fbi-adulterers-supporting-crooked.html
-
The smoking gun: 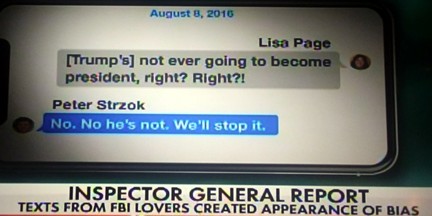 -
Strzok is still in the FBI and on the taxpayer payroll!
-
-
Some malfeasant actions Strzok and associates took on Hillary's behalf:
No Grand Jury
No sworn statements
Immunity for everybody involved
Slow-walking the Weiner evidence
Authorized destruction of computers and cell-phones with their data to ensure no follow-up ability.
-
Then Strzok used the DNC Trump Dossier to mislead the FISA court for surveillance approval and then sent agents into the Trump Campaign to entrap unwitting campaign workers.
http://roanokeslant.blogspot.com/2018/02/fbi-doj-fisa-abuse-treason.html
-
Now we learn that DOJ Rosenstein has threatened Congressional staff with retaliatory abuse if they continue to investigate the DOJ-FBI handling of the Hillary and Collusion and Obstruction issues.
http://www.ntd.tv/2018/06/13/justice-departments-rosenstein-threatens-legal-pushback-against-congress-oversight/
Mr. Rosenstein, Congress represents “The People” and has Constitutional Oversight Authority over the DOJ-FBI and You!
Talk about crocodiles in the DC Swamp and our ‘Justice’ System out of control!  Shades of the KGB!
http://roanokeslant.blogspot.com/2018/05/why-justice-department-is-defiant.html
-
- 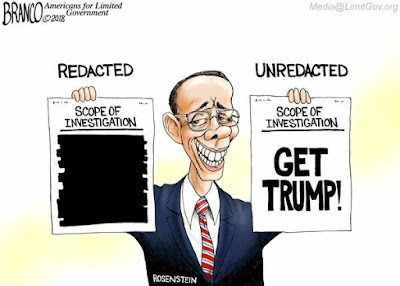 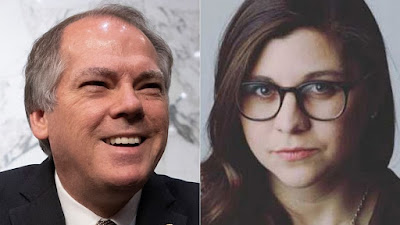