-
Roanoke Times, 3-17-2013, Pg 3: Rising sea levels threaten historic Jamestown. Scientists say it will be underwater by the year 2100.
-
16,000 years ago the North Carolina Outer Banks were 50 miles out at the continental shelf because the ocean was 400 feet lower that it is now.
Talk about your rising sea levels!
Must have been a big adjustment for the Algonquians, North Carolina’s coastal Indians!
-
Why don’t the authors and publishers of these apocalyptic articles ever put things into perspective, and why don’t they ever publish the graphics showing the history of rising sea levels?
Apparently that would spoil the fun out of scaring people who don’t remember their 8th grade earth science course and who are being brainwashed with Gorite global warming propaganda.
http://en.wikipedia.org/wiki/Current_sea_level_rise
-
It's nice to settle by and build your home and business near the sea; But!
- 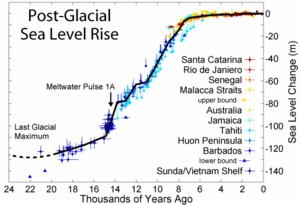 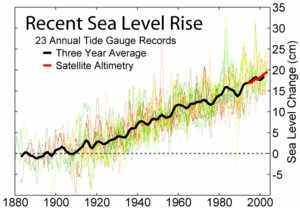 The Washington Post reports latest on global warming and sea level rising; the last paragraph should convince even the most die-hard Skeptic:
-
The Arctic Ocean is warming up, icebergs are growing scarcer and in some places the seals are finding the water too hot, according to a report to the Commerce Department yesterday from Consulafft, at Bergen , Norway
-
Reports from fishermen, seal hunters, and explorers all point to a radical change in climate conditions and hitherto unheard-of temperatures in the Arctic zone. Exploration expeditions report that scarcely any ice has been met as far north as 81 degrees 29 minutes.
-
Soundings to a depth of 3,100 meters showed the gulf stream still very warm. Great masses of ice have been replaced by moraines of earth and stones, the report continued, while at many points well known glaciers have entirely disappeared.
-
Very few seals and no white fish are found in the eastern Arctic, while vast shoals of herring and smelts which have never before ventured so far north, are being encountered in the old seal fishing grounds. Within a few years it is predicted that due to the ice melt the sea will rise and make most coastal cities uninhabitable.
* * * * * * * * *
I apologize, I neglected to mention that this report was from November 2, 1922, as reported by the AP and published in The Washington Post - 90 years ago.
*****************
-
Sea Level Rising For 20,000 Years And Still Rising
http://roanokeslant.blogspot.com/2012/06/sea-level-rising-for-20000-years-and.html
-
SeaLevelGate Yet Another AGW Global Warming Distortion
http://roanokeslant.blogspot.com/2011/06/sealevelgate-yet-another-agw-global.html
-
There’s Money In Rising Tides
http://roanokeslant.blogspot.com/2010/12/theres-money-in-rising-tides.html
-
-